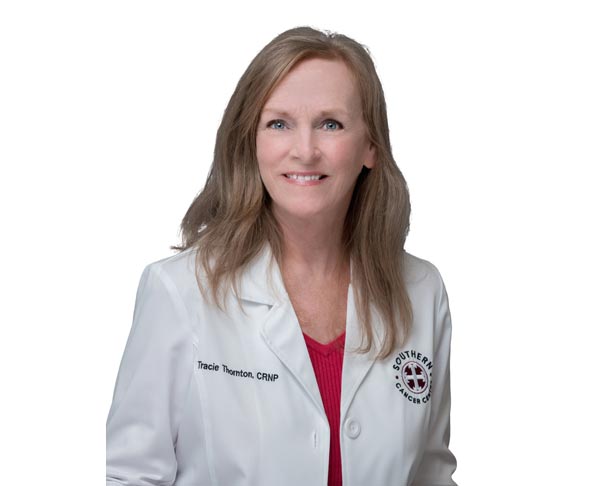 Tracie was born and raised in Cullman, Alabama. She graduated high school in 1985. She joined the Army in 1987 and went to San Antonio, Texas for training as an MLT (medical lab technician). In 1992, she graduated from Wallace State Community College in Hanceville, Alabama with her Associate’s Degree in Nursing. She worked at Cullman Regional Hospital in med/surg and ICU until 1998 when she transferred to Cullman Oncology/Hematology as a chemotherapy infusion nurse. Afterwards, she worked in home health until 2011 when she went to UAB Birmingham in order to obtain her Bachelor’s and Master’s degrees. At that time, she worked as a nurse in the float pool at UAB. She completed her Master’s degree in Adult Primary Care with a dual degree in Hematology/Oncology from UAB/Birmingham in 2016. She has dual certification in both the AANP and ONCC/AOCNP. She started working at The Cancer Center in Huntsville, now Southern Cancer Center Huntsville, in 2017.

She is passionate about her role in helping others and has never had a desire to pursue any other career choice. She feels as though she was called by God to serve in the Hematology/Oncology field. She feels both humbled and blessed to be able to work in a field that allows close, personal relationships with her patients, as well as their families. She works to help them through their cancer journey, ensuring that they feel that they are the cared for and are receiving optimal care while being able to enjoy optimal quality of life.

She enjoys college football, outdoor activities, spending time with friends and family. She is very active in her church and the mother of 2 sons and grandmother (Bram) of two grandchildren, (with more on the way).

Back to the top